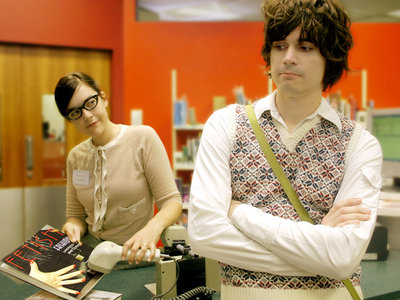 In 1998, Bree and Mansfield were playing in different bands and met when they played a show together; the Brunettes were born when the pair decided they'd like to collaborate on sweet but smart pop inspired by '60s girl groups and '70s punk. Later that year, the Brunettes' debut EP, Mars Loves Venus, arrived. Though the band's first release arrived relatively quickly, it took another four years for the band's first full-length, Holding Hands, Feeding Ducks, to appear on Lil' Chief Records. The charm of this album and the Boyracer EP, released in 2003, won the Brunettes a devoted following in their homeland. The group spent 2003 and 2004 touring Australia and the U.K. 2004 saw the release of their second album, which was also named Mars Loves Venus (the EP and the album only have the title track in common), and reflected the Brunettes' increasing skill in the studio and influences from Gram Parsons to Prince. The band made it to the U.S. in 2005 as support for the Shins, and released the When Ice Met Cream EP to commemorate the occasion. That fall, they signed to Sub Pop and toured the globe extensively for 4 years. The group's most sophisticated album yet, 2007's Structure and Cosmetics became the first Brunettes album to be released domestically in the U.S.