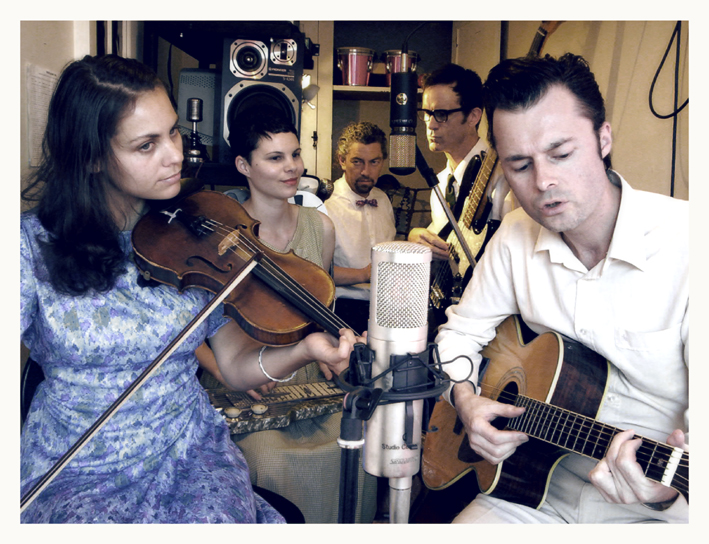 The Nudie Suits first formed way back in 1997, following Dionne Taylor's first encounter with the magical Hawaiian steel guitar. She began learning to play the instrument and her friend, Mark Lyons, was inspired to write songs to incorporate its beauty: '...we use the steel guitar to play set melodic riffs tailored specifically to each original composition. Our sound has been given various descriptions: Hawaiian folk-rock, roots pop, alternative country-rock and perhaps most accurately - classic pop music with truly unique instrumentation.'

Dionne's sister Tammy joined soon after, on violin. Since then they have worked with numerous musicians to flesh out their sound with bass and drums. Mark came up with the name, which was a reference to an eccentric American tailor: 'Nudie Cohen was a Jewish tailor to the stars who operated in Hollywood during the 1950's/60's. Some of his more well-known creations were Elvis Presley's gold Lame suit of 1956 and Gram Parson's marijuana leaf outfit from 1969. The eye-catching apparel produced by his small workshop soon became commonly referred to as a Nudie Suit.'

The group have released two albums through Lil Chief Records - Songbook and Sweetacres. Mark remains philosophical on the band's failure to achieve worldwide fame and fortune: 'On the question of fame, an explanation of the mechanics of the music industry would take more space than is available here.'