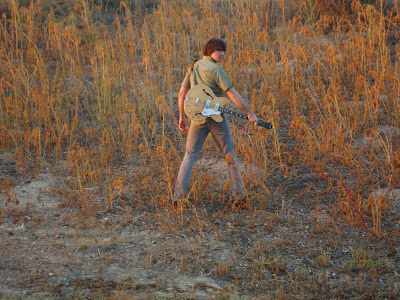 As Jonathan Bree stood in line to board Pacific Blue Flight 252 he couldn't help but feel like a complete and total rock star.

Only ten years ago he had had to make the journey to Wellington by travelling ten hours in a van - but since then his resounding success as a musician meant he was now travelling by plane.

"Are you from Kings of Leon"? - a sweet female voice interrupted his musings. "Do you play guitar?" "There's a seat free next to me if you want a bit of a chat".

Jonathan Bree smiled coyly to himself. Having females throwing themselves at him because he looked like he was from Kings of Leon (who most likely fly using budget airline Pacific Blue too), was something he was only slowly growing accustomed to.

The Brunettes had always looked forward to playing shows in Wellington. A Wellington crowd was generally more responsive than an Auckland crowd. Furthermore, Jonathan felt that Wellingtonians still seemed to view him as somewhat exotic and special, whereas in Auckland he had become just another pastey white face in a sea of underweight musicians.

Whatever the reason, he hadn't played a show here in two years and was PUMPED.

Soundcheck was a total dream. The San Francisco Bathhouse was an accomodating venue and sound man Hayden, a friend and former band member knew the band's sound requirements like he knew his own mother. Fairly well because he'd spent a lot of time with her.

And so the night began.

The first and second acts performed strong and professional sets, which meant the pressure was on for the Brunettes. Even while chilling out / generally relaxing, musicians are always looking to jam and bounce off each others creativity, so it was extremely fortunate that the backstage area contained an upright piano. To raise morale amongst band members, an acoustic sing-a-long to Marcy Playgrounds Sex & Candy ensued.

While singing confidently and excitedly along, Jonathan Bree cast a friendly glance at fellow bandmate / wife / cousin, Heather Mansfield. He couldn't help but notice that she was not singing along to "and there she was like double cherry pie and there she was like disco superfly". Unfortunately for the Brunettes it was not because she thought the song was a crappy Nirvana rip off pile of steaming late nineties turd. She had lost her voice.

For Jonathan and all of the Brunettes, Heather losing her voice was like losing your favourite pair of jeans in the changing rooms at the Waiwera Hot Pools. Most likely bad, and definitely awkward because you cant really walk out with no pants on.

But out they did walk with no metaphorical pants on.

However this would only be the first in a series of challenges presented to the Brunettes that night.

At approximately the same time - also being adjusted were the knobs on the sound desk - not by Hayden the qualified sound man, but by Bruce the random and unqualified drunk man.

Yet the set went on. Heather bravely attempted to sing as best as she could, Andrew in excruciating pain managed to stay standing upright for the entire set, and Hayden with his desk in disarray managed to fix most major problems by half time.

But by half time - it was clear - this would be the worst gig of the Brunettes career.

Reflecting on the night while on the flight back home, Jonathan Bree felt an explanation would be needed for the people of Wellington. He tapped fellow bandmate / sister Chelsea Nikkel on the shoulder - 'hey do you think you could do some kind of blog thing about the gig last night, i kind of feel like we could at least try and explain some of the problems people might not have been aware of'.

'Ok but only if you let me publish it with that lame photo of you casually glancing back at the camera while chilling out with your guitar in the desert'.