One Million Views - An Essay On Achieving Internet Hype in 2012

Well today a song I wrote called ‘The Cigarette Duet’ has hit one million views on Youtube.

To blow my own trumpet, after I had finished writing it on the Roland E-20 I used to play in Teenwolf (a keyboard which for some inexplicable reason appears to have a large bitemark taken out of the 3rd A key) I decided it was a catchy and good pop song and was fairly convinced I’d written an indie hit. I began to suspect that I’d written an indie crossover hit when early on my parents leaked it to a number of Jehovah’s Witnesses who gave them very positive feedback.

Turns out I was somewhat right.

Like a lot of independent artists everything I do is made on a shoestring budget, although not necessarily by choice.

However, as of today, the music video for 'The Cigarette Duet' has more views on Youtube than for instance, all of Six60's and The Midnight Youth's music videos, combined (two top 40 artists in New Zealand).

This is extremely encouraging. It is encouraging because in the music video I am wearing a swimsuit, which means people must generally agree that I look attractive and cute in my swimsuit / quirky wig.

Possibly even more encouraging though, is that this also indicates that the power of a good song can transcend limitations in funds and resources, and still go on to connect with people all over the world, and on this occasion surpassing the results of even the most structured and high budget marketing campaigns. (In Lana Del Rey's case the combination of these two things has proven to be phenomenal).

In a chinese whispers scenario, much of the online interest surrounding 'The Cigarette Duet' has been simply due to people from all walks of life passing links around via websites like facebook, tumblr and most certainly not myspace. 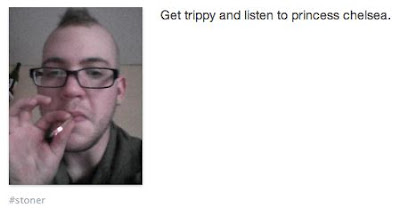 The slightly controversial subject material has probably helped too, sparking a number of intellectual debates via the comments section of Youtube.

Of course there has been support from the fingerboarding scene;

a number of covers;

If the resulting sales continue at their current trends, and one in every 15,000 viewers orders a Lil' Golden Book LP then I am very excited to be able to pay off most of the vinyl shipping costs in the next few months!

Of course there are other angles to examine. As an artist, I am aware of the danger of becoming pigeon holed as 'the hipster girl from the cigarette duo'. Perhaps it will be that not one percent of youtube viewers will care about my sophomoric album, which is going to be, naturally, a concept opera concerning our perception of each other on the internet.

However I could almost be happy to settle for these consequences having garnered the knowledge that even if people don't pay for a good song these days, they most certainly will listen to it.