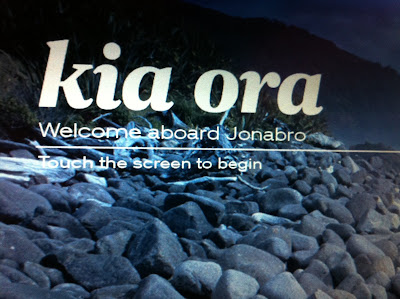 Our tour hasn’t started yet we have just been in London checking our Facebooks.

We flew Air New Zealand on Sunday night at 9pm and spent 24 hours on a plane.

I wore a Pink Floyd Dark Side Of The Moon tracksuit with traditional bling and sparkly glitter Docs with a side ponytail.  Cant remember what everyone else was wearing because it wasn’t that.

I was interested to see if we would get overcharged for our luggage by Air New Zealand.

Recently a few Kiwi musos have been negatively affected by the airlines luggage policies, as musical instruments checked in must be under 1m in length or are subject to oversize charges.

This could be very acceptable if you play and travel with a tiny flute or undersized  soprano recorder but not so reasonable if u play a standard 61 note keyboard or any guitar or bass designed for an adult human being.

Furthermore, travelers who have sporting equipment such as radical surfboards, or awesome skis have up to a 2m length allowance.

A choice Firearm or sick Firearm(s) (multiple) are have no apparent length restrictions.

I was nervous because all of our IRL sized instruments were over 1m in length.

Thankfully though, the lady at the counter seemed real chill and cool and didn’t bat an eyelid when my dangerously humongous 1.3m bass guitar slid lengthily across the luggage belt.

Relieved, we all made our way to security and boarded the plane.

The flight over was about as comfortable as flights get in pacific class.

Naturally, I settled in, played some Tetris and then watched 500 Days of Summer. I ordered a drink every time a Joy Division t shirt appeared on the screen. Obviously I am joking or I would have died from alcohol poisoning but I did watch 500 Days of Summer for the first time and I’m trying to keep this short so will not go into my thoughts and feelings about it.

The new inflight safety video was quirky and set outdoors in a kiwi national park. I thought it was much better than the last one which was animated and featured the likeness and voice of the guy from the TV show Modern Family on it / Snoop Dogg.

We try our best as a band to be polite and courteous travelers, and I like to think we are a nice band and nice people.

However, there is a certain breed of air hostess who really doesn’t seem to get along with Jonabro.

Perhaps you’ve encountered one before – its the breed that makes you feel like a bad and naughty teenager for making reasonable requests, possibly because you look arty (probably on drugs) and in your 20s.

After our impressive in flight meals (I am not being sarcastic, Air NZ really does have the best plane food) Jamie, myself and Jonabro ordered a few drinks.

Air NZ has a cool new feature whereby you can order your drinks using your touch screen.

After about 45 minutes Barbara turned up with mine and Jamie’s drinks.  Jonabro piped up that he had ordered a Bloody Mary so Barbara visibly upset left and returned moments later with it.  She then literally said “There you’ve got all your gins, all your drinks are you happy now”.

Its hard to describe in text form the tone of her voice while saying this  -  but it was not friendly.  I guess you could type it in all caps but maybe in like some kinda hot pink calligraphy font with exclamation marks or something: It was snide and judgmental while confusingly sexy at the same time.

Anyway two hours later Jonabro ordered a gin and tonic which never showed up.  After waiting for quite a long time he politely informed Barbara. She leaned forward and aggressively asked him “WHAT DID YOU ORDER!!??” while shaking her head from left to right in an almost comically mean way.

Jonabro was a bit offended and couldn’t help himself so he responded in a 100% accurate impersonation of her voice complete with comical head shake “A GIN AND TONIC”.

Our shuttle driver who picked us up at Heathrow airport (BA TRANSFER I HIGHLY RECOMMEND THEM) was a real cool bro and he was very impressed with my choice of Magic FM – he said that it played nice smooth jams. Listening to Joan Osbournes’ What if God Was One Of Us’ while driving on the M5 was officially my first memorable moment of this trip.

I will write again with I assume, many more to come.