In 2006 we released the Reduction Agents first and only album "The Dance Reduction Agents". It was special for many reasons, but mostly it was James Milne's (aka Lawrence Arabia's) first venture as a singer songwriter and the band were one of the most compelling live bands in Auckland at the time.

After 10 years we decided to give the stereo masters a bit of a remaster with the help of Edmund Cake and reissue it again (and on vinyl for the first time!)

We also asked fellow label mates and muso friends if they'd like to record a cover for some sort of tribute. The response was overwhelming so we actually put together a full album length tribute.

The reissue of "The Dance Reduction Agents" and its tribute album "Waiting For Your Love" will be released on the 12th of August.

To kick things off here is the first offering from the tribute album. A complete reimagining of "Our Jukebox Run Is Over" by The Ruby Suns. Fun fact, Ryan McPhun was also the drummer for the Reduction Agents. 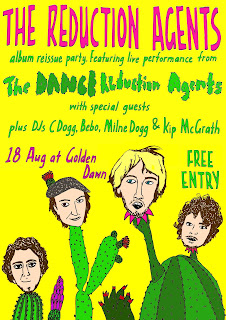 Pre orders are available for vinyl